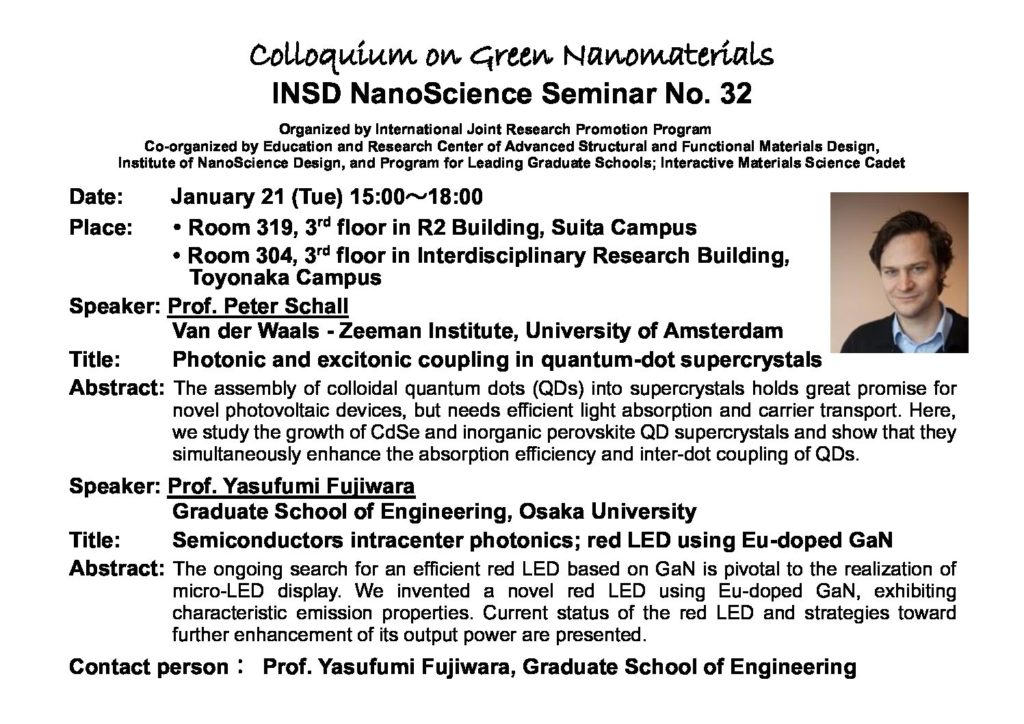 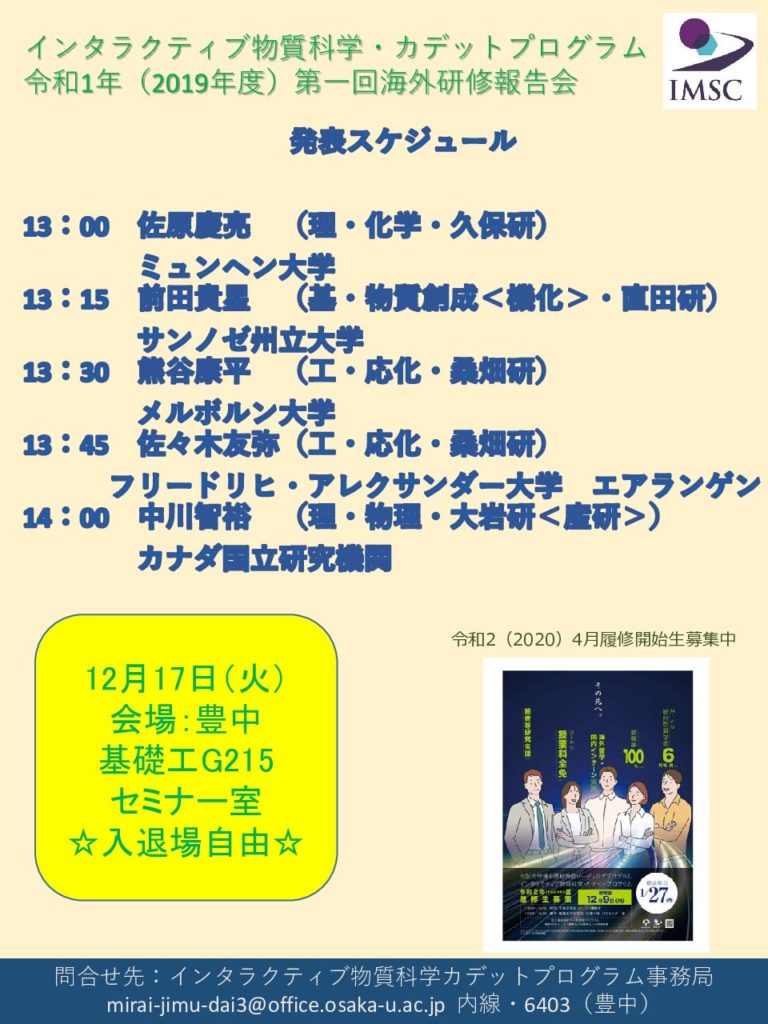 On 17th December, 1st Internship Program (international) Debriefing Session will be held.
You can join us without reservation. 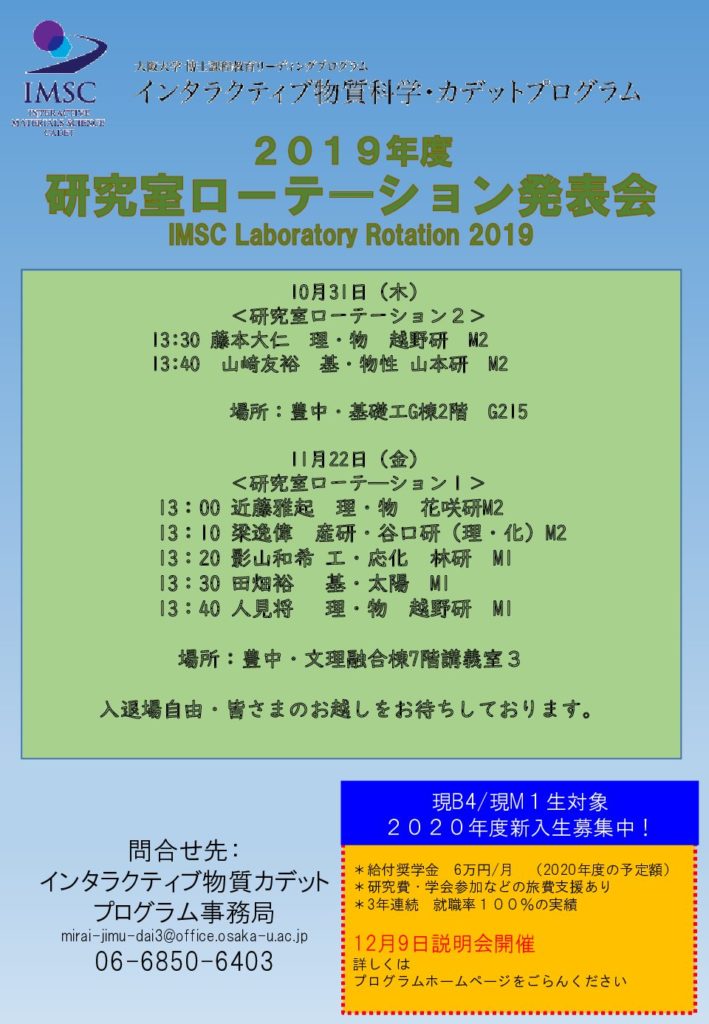 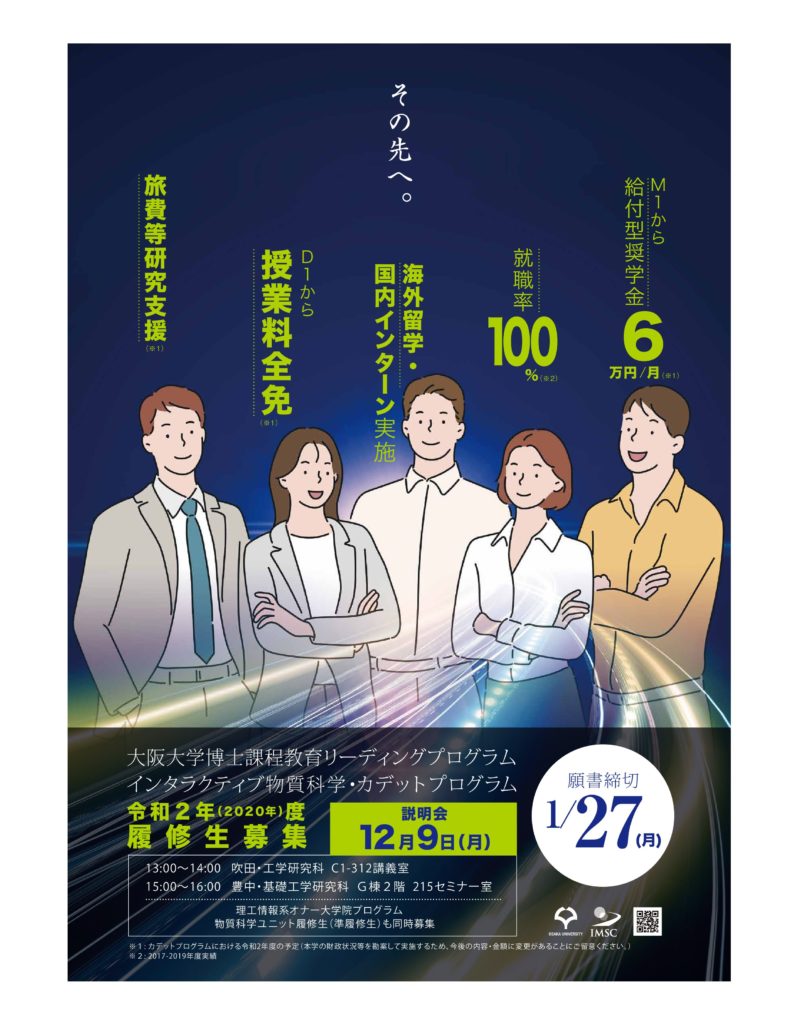 Cadet Program briefing session for the 8th class will be held.
You can join us without reservation！

More info. ⇒ Application Guidelines(Sorry, this entry is only available  in Japanese) 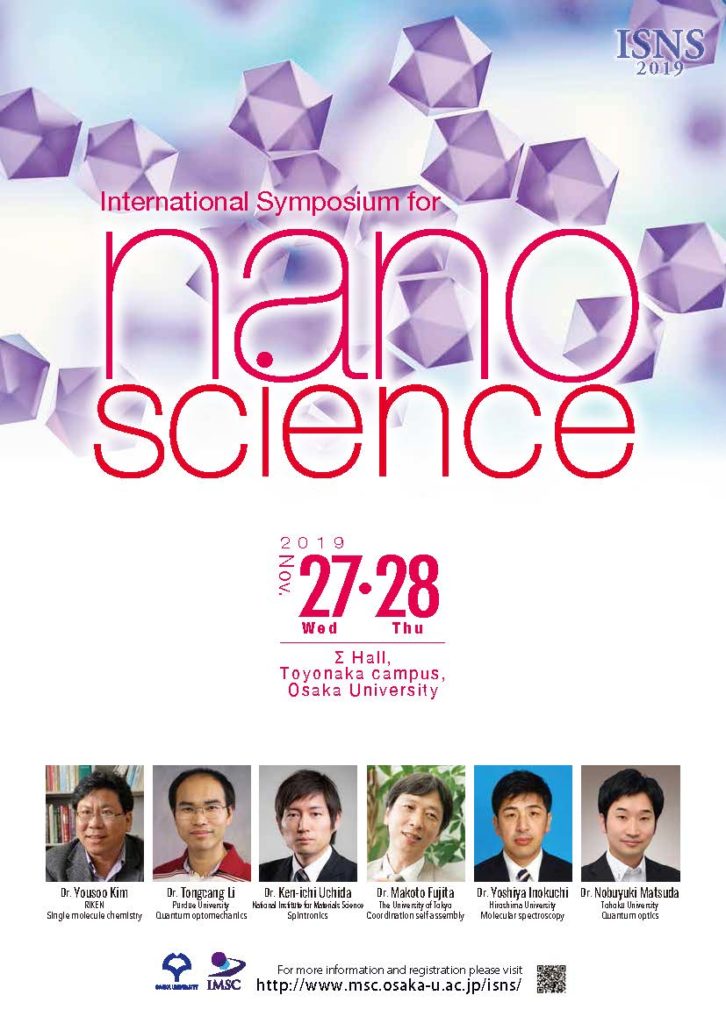 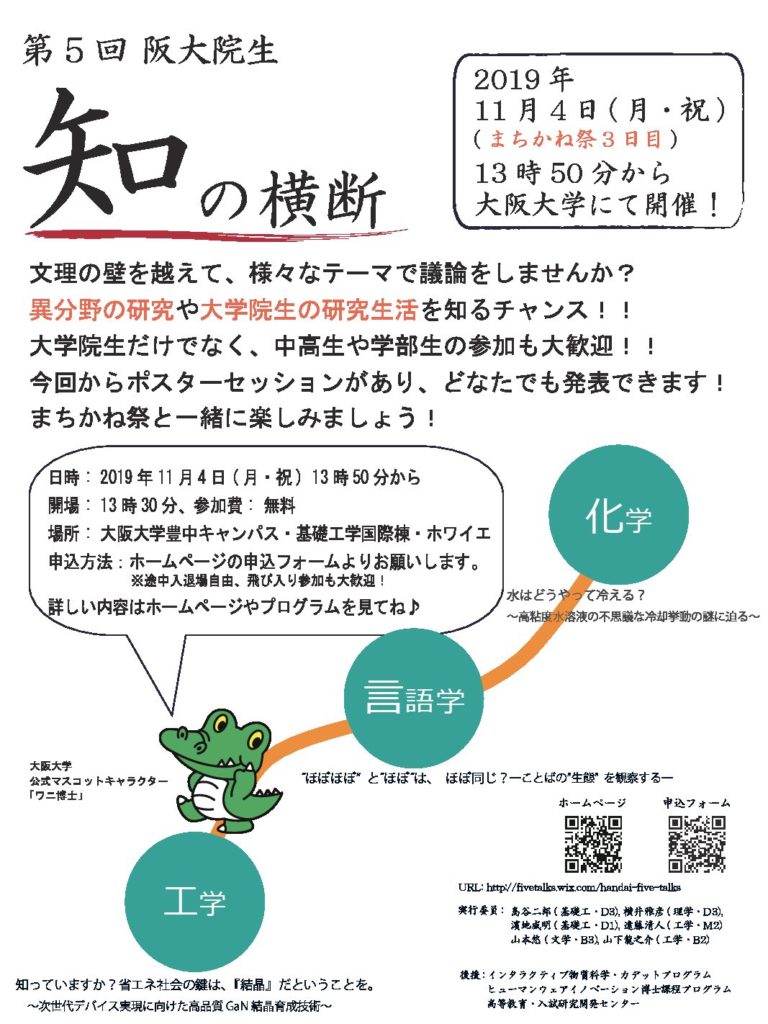 Let’s join and talk with us!! 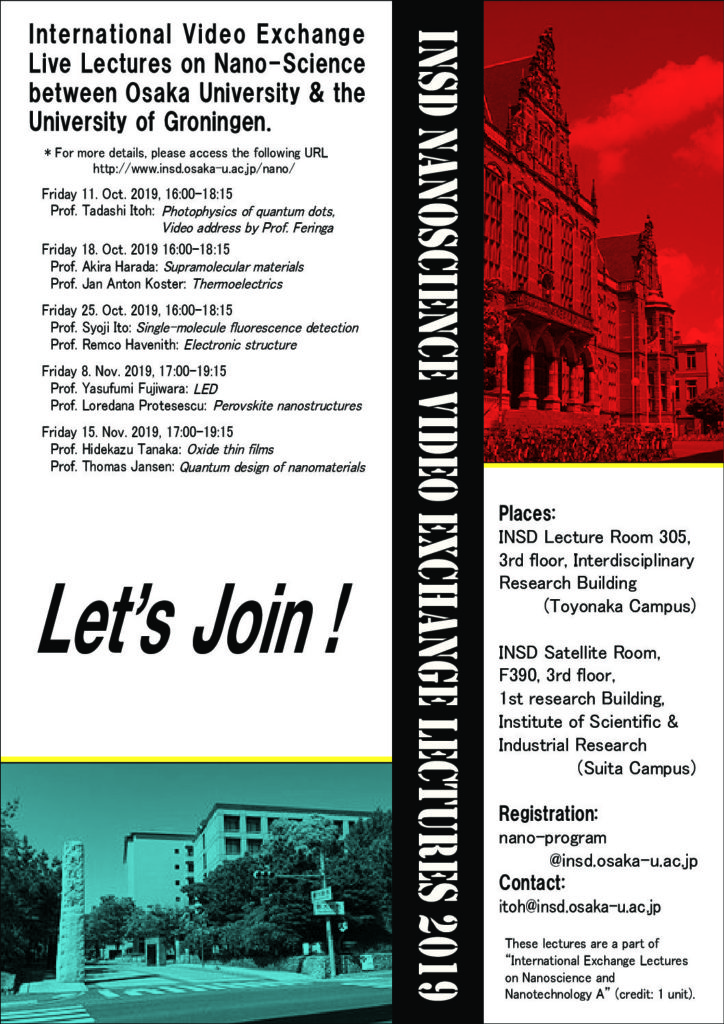 The abstracts of the lectures will be soon uploaded on the website: http://www.insd.osaka-u.ac.jp/nano/

Abstract: Cooper pairing of electrons to form a superconductor can occur via multiple mechanisms [1]. The well-established phonon-mediated pairing in conventional superconductors, such as Al and Nb, results in spin-singlet pair wavefunction that has uniform phase over the Fermi surface. Alternative mechanisms, such as superconductivity driven by spin fluctuations, can lead to both spin-singlet and spin-triplet pairs with complex structures in momentum space. Such unconventional pairing is understood to be required for high temperature superconductivity; moreover some of the spin-triplet superconductors are predicted to have exotic topological properties [2]. There are numerous unconventional superconductors among heavy-fermion metals, however the precise pairing state is rarely known unambiguously. The canonical heavy-fermion metal YbRh2Si2 hosts both antiferromagnetic and ferromagnetic fluctuations [3]. It orders antiferromagnetically at 70 mK, but doping allows to tune the magnetism across two antiferromagnetic and one ferromagnetic phase [4]. Evidence for superconductivity and nuclear magnetism below 2 mK have been reported recently from a study of magnetic properties of YbRh2Si2 [5]. Transport measurements in this temperature regime are challenging and I will report on novel SQUID-based techniques we have developed and applied to probe high-quality single crystals of YbRh2Si2 and microstructures machined from such crystals using focussed ion beam. We observe unambiguous signatures of superconductivity, such as quantised persistent currents. A complex phase diagram emerges in magnetic field, demonstrating interplay between superconductivity and magnetism. The observed superconductivity beyond Pauli limit and distinct transport regimes, that potentially represent different superfluid phases, point towards unconventional spin-triplet superconductivity driven by the ferromagnetic fluctuations. This opens an intriguing possibility that YbRh2Si2 is a crystalline topological superconductor, a sought-after material with promising applications in quantum information processing. 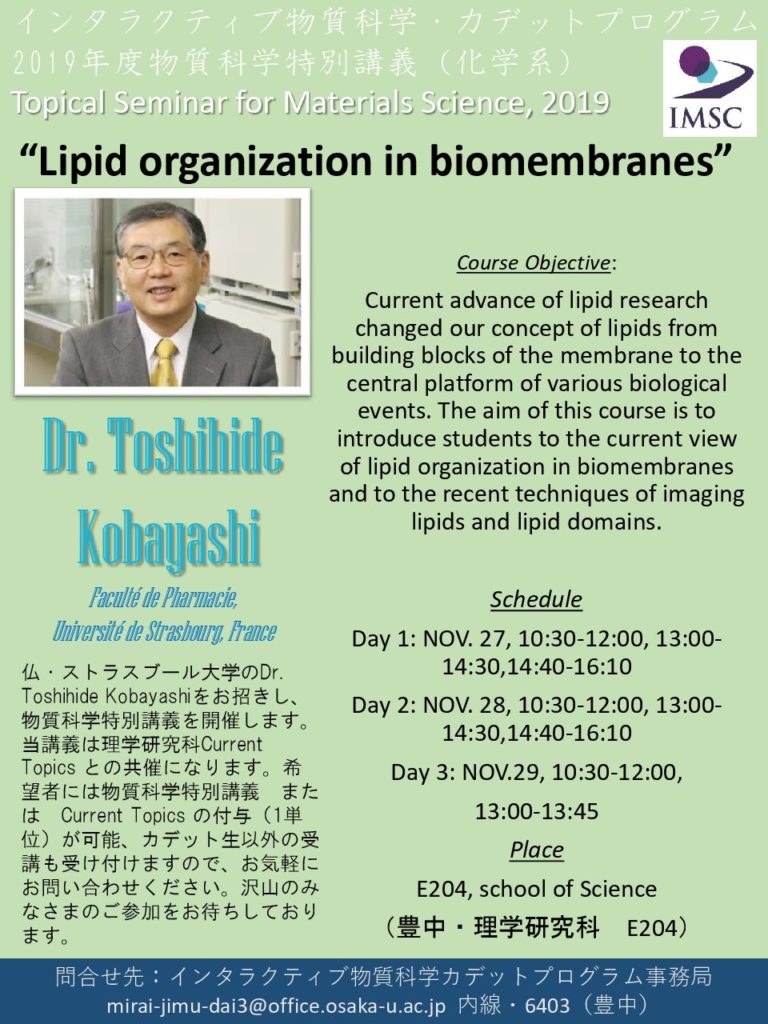 Topical Seminar for IMSC 2019 will be held.

Course Objective:
Current advance of lipid research changed our concept of lipids from building blocks of the membrane to the central platform of various biological events. The aim of this course is to introduce students to the current view of lipid organization in biomembranes and to the recent techniques of imaging lipids and lipid domains. 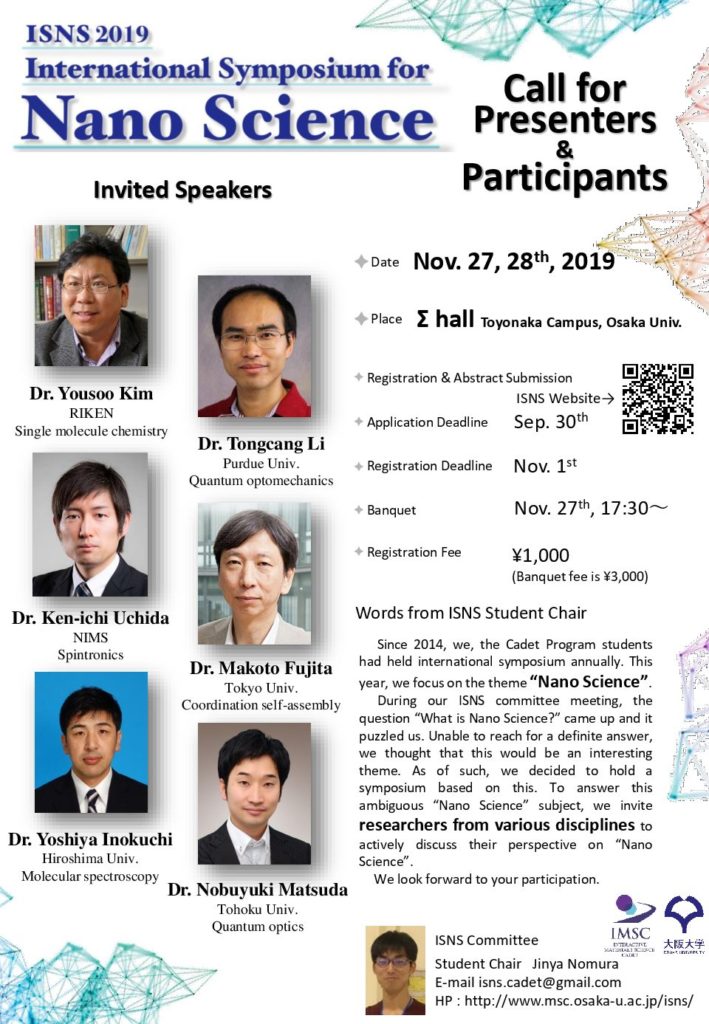 ＜Topical Seminar for IMSC 2019 ＞The Institute for NanoScience Design, Osaka University will invite foreign lecturers from abroad and hold the INSD summer school 2019 on nanoscience and technology, composed of four topics of lectures that are usually taught in topmost foreign universities.
The summer school is aimed at fostering international young talent on nanoscience and nanoengineering.
This program is shared with University of Tsukuba and connects three campuses, Toyonaka, Suita, and Tsukuba, via video conferencing systems.
The lecture documents will be uploaded on URL: http://www.insd.osaka-u.ac.jp/nano/. 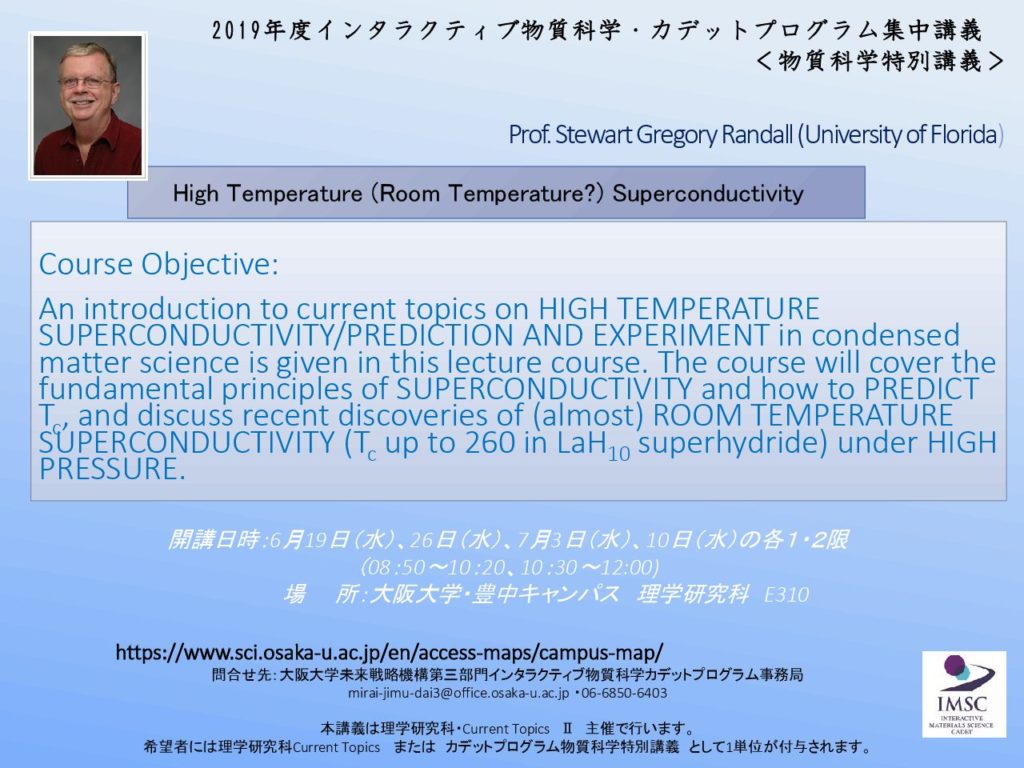 Topical Seminar for IMSC 2019 will be held. 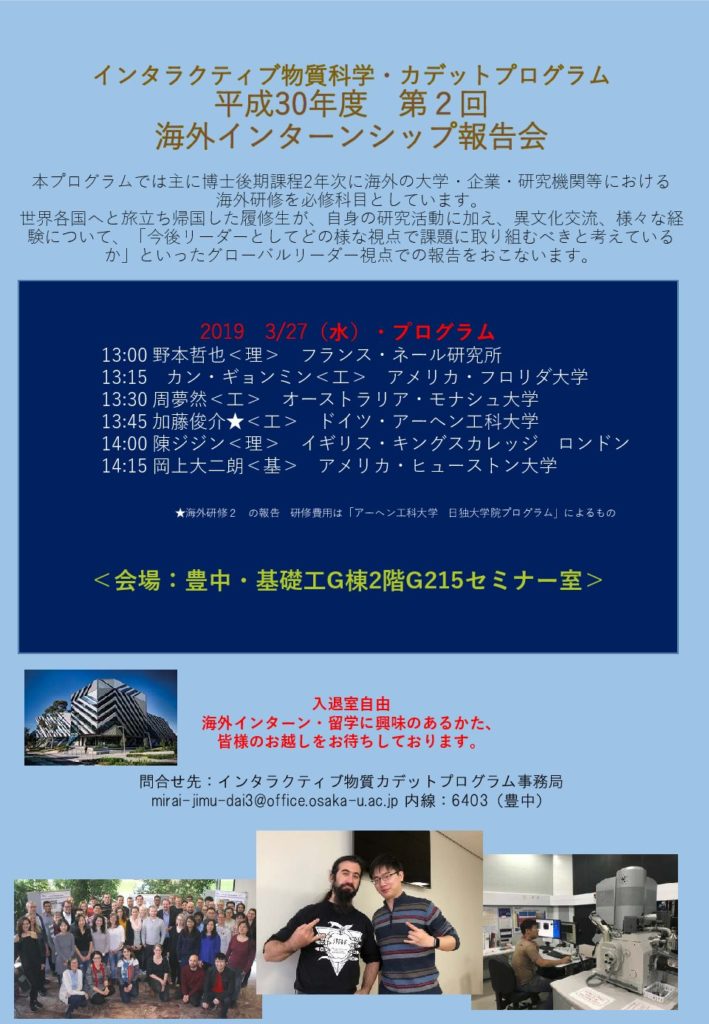 On March 27, 2nd Internship Program (international) Debriefing Session will be held.
You can join us without reservation.